It’s officially fall, which means an earlier nightfall and darker skies – and more time for stargazing! So, the next autumn evening you find yourself gathered around a Seasons Fire Pit, look up. There are several bright constellations visible in the fall that you can easily find – even in less clear skies.

One of the most recognizable is Cassiopeia. She can be found high in the northeast on October evenings, and once you know her shape, you’ll pick her out quickly. She’s compact and looks like a 3 or W depending on the time of night. 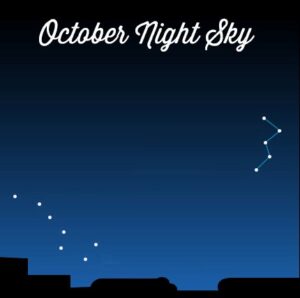 And now that you can find Cassiopeia, you might want to share her story. She was a queen in ancient Greek mythology. According to legend, she boasted she was more beautiful than the sea nymphs. Her boast angered Poseidon, god of the sea, who sent a sea monster to ravage the kingdom. To pacify the monster, Cassiopeia’s daughter, Princess Andromeda, was left tied to a rock by the sea. The monster was about to devour her when Perseus swooped down upon Pegasus (the winged horse) and rescued the Princess, and all lived happily ever after.

The story goes that the gods were so pleased in the end, that these characters were elevated to the heavens as stars. Only Cassiopeia suffered an indignity – as a price for her vanity, she was bound to a chair and placed in the heavens so that, as she revolves around the north celestial pole, she is sometimes in an upside-down position.

October is usually one of the dryer months of the year, and we hope you enjoy many evenings spent with friends around a Seasons Fire Pit, star gazing occasionally and telling tales frequently.

There are many Christmas traditions, from enjoying The Nutcracker to caroling, but some of our…

St Patrick’s Day celebrated on March 17th is all things Irish, from Leprechauns to Irish…

Add Aromatic Bundles to Your Next Fire