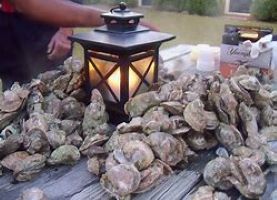 Really good oysters have mud on ‘em and mud on ‘em is a reminder of where they’re coming from.
Food is the universal language. It brings people together, reminds them of where they came from, and can be a source of incredible pride. There are many different forms of food get-togethers, such as crawfish boils, barbecues and grill outs. However, there is one particular low country delight that originates from Charleston, South Carolina, it’s known as an oyster roast. An oyster roast includes a fire pit, burlap bag, bushel of oysters, stocked cooler, and a variety of sauces. Aside from the right ingredients, how you prepare/cook your oysters is equally important to the success of your roast.
Estimating how many oysters to purchase is always the hardest part, but typically allow one-and-a-half to two dozen per anticipated guest.
Build a fire in your fire pit, once the fire is red hot, put the ring on the fire pit, sprinkle a few drops of water on the metal—when the water sizzles, you’re ready to go. Now spread the oysters evenly on the top and cover the oysters with a water-soaked burlap bag and allow the oysters to steam for 8-10 minutes. The oysters are ready when their shells are just starting to crack open a few millimeters. Just keep in mind that the wider they crack open, the less juicy they will be. Since the oyster’s flavorful liquor is one of its most hallowed qualities, it’s important not to overcook them.
The standard oyster roasts accoutrement are saltines, cocktail sauce, hot sauce and maybe horseradish. Add cold beer and depending on the season either a gin, or whiskey cocktail is perfection and possibly the best time you have had around a fire pit!

The Season of Renewal

Spring is the season for renewals. And for many Americans, much of that focus is…

StyleBlueprint: The Alabama Gal Whose Firepits are Keeping the South Cozy

StyleBlueprint: The Alabama Gal Whose Firepits Are Keeping the South Cozy As published on December…

The Gift of Time Spent Together